This year’s contest will be the 32nd edition of the game and the 21st in Orlando.

The game will kick off at 5:30 p.m. on Thursday, Dec. 29, at Camping World Stadium and will be televised nationally by ESPN. Florida State and Oklahoma have met seven times previously, with the Sooners claiming six wins, including a victory in the 2001 BCS Championship Game in Miami. The teams most recently met in 2011 in Tallahassee.

Florida State has made three previous Cheez-It Bowl appearances, with the most recent coming in 2011 against Notre Dame. The Seminoles also won the 2008 Champs Sports Bowl over Wisconsin and won the inaugural Cheez-It Bowl, known then as the Blockbuster Bowl, in Miami in 1990. Florida State also made an Orlando bowl appearance in the Tangerine Bowl in 1977 — Bobby Bowden’s first bowl win as head coach in Tallahassee. ​

Oklahoma’s only previous Cheez-It Bowl appearance came in the 2011 edition of the game, known then as the Russell Athletic Bowl.

Tickets for the Cheez-It Bowl are available via Ticketmaster. Premium seating and additional offers can be found on our Tickets page. Groups of 10 or more may call the Florida Citrus Sports offices at 407.423.2476. 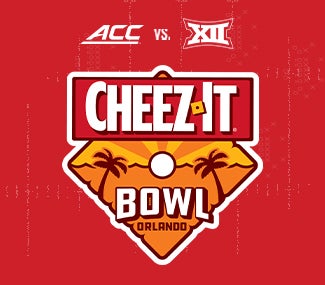