The 2020 Cheez-It Bowl, featuring top teams from the Atlantic Coast Conference and Big 12, will take place Tuesday, Dec. 29 at 5:30 pm at Camping World Stadium and will be broadcast on ESPN.

This bowl season will mark Cheez-It’s first as an Orlando bowl title sponsor. In last year’s game, then known as the Camping World Bowl, Notre Dame defeated Iowa State 33-9 behind 146 receiving yards and a touchdown from game MVP Chase Claypool, now with the Pittsburgh Steelers.

Information regarding tickets and fan attendance at the Cheez-It Bowl will be announced at a later date. 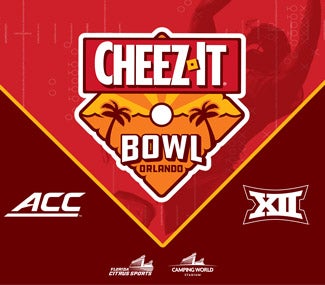