Originally titled the Blockbuster Bowl, the game was born in Miami, Florida, in 1990 and thrived in its first year with a marquee matchup between Penn State and Florida State which drew more than 74,000 fans. After 11 seasons in South Florida, the game was acquired by Florida Citrus Sports and moved to Orlando. The first edition of the game in Central Florida was called the Tangerine Bowl, a tribute to the name of Orlando’s original bowl game (now the Citrus Bowl).

With each successive year in Orlando, the bowl has continued to make strides, at one point posting eight consecutive years of attendance increases (a standing record among bowl games). Over the past five years, the bowl has averaged just shy of 55,000 fans per game.

Tickets to the Camping World Bowl are included in a Florida Citrus Sports membership. Click here to learn more! 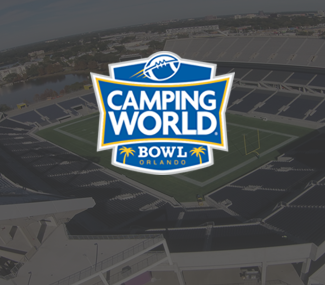